THE FINAL STUDIO ALBUM BY FISH
OUT NOW
BUY ALBUM
In September 2020, I released my final studio album ‘Weltschmerz’. It’s been over 5 years since I first came up with the title which is a German word that translates to ‘world weariness’ or ‘world pain’. In this present day and age never has an album title become so apt.

The writing process has been prolonged and demanding, taking place over the last 4 years, but the end results I promise you are more than worth the wait.

Together with my long term principal co-writer, the talented multi instrumentalist, engineer and co producer Steve Vantsis who worked with me on 2007’s ‘13th Star’ and the acclaimed last album ‘A Feast of Consequences’, we have put together around 86 minutes of material, an ‘old fashioned’ double album that will be released on 2 cd’s.

Renowned producer Calum Malcolm (Blue Nile, Prefab Sprout, Clannad) is again at the helm and has brought his wealth of expertise and immense musical knowledge to create what is without doubt my finest album to date. 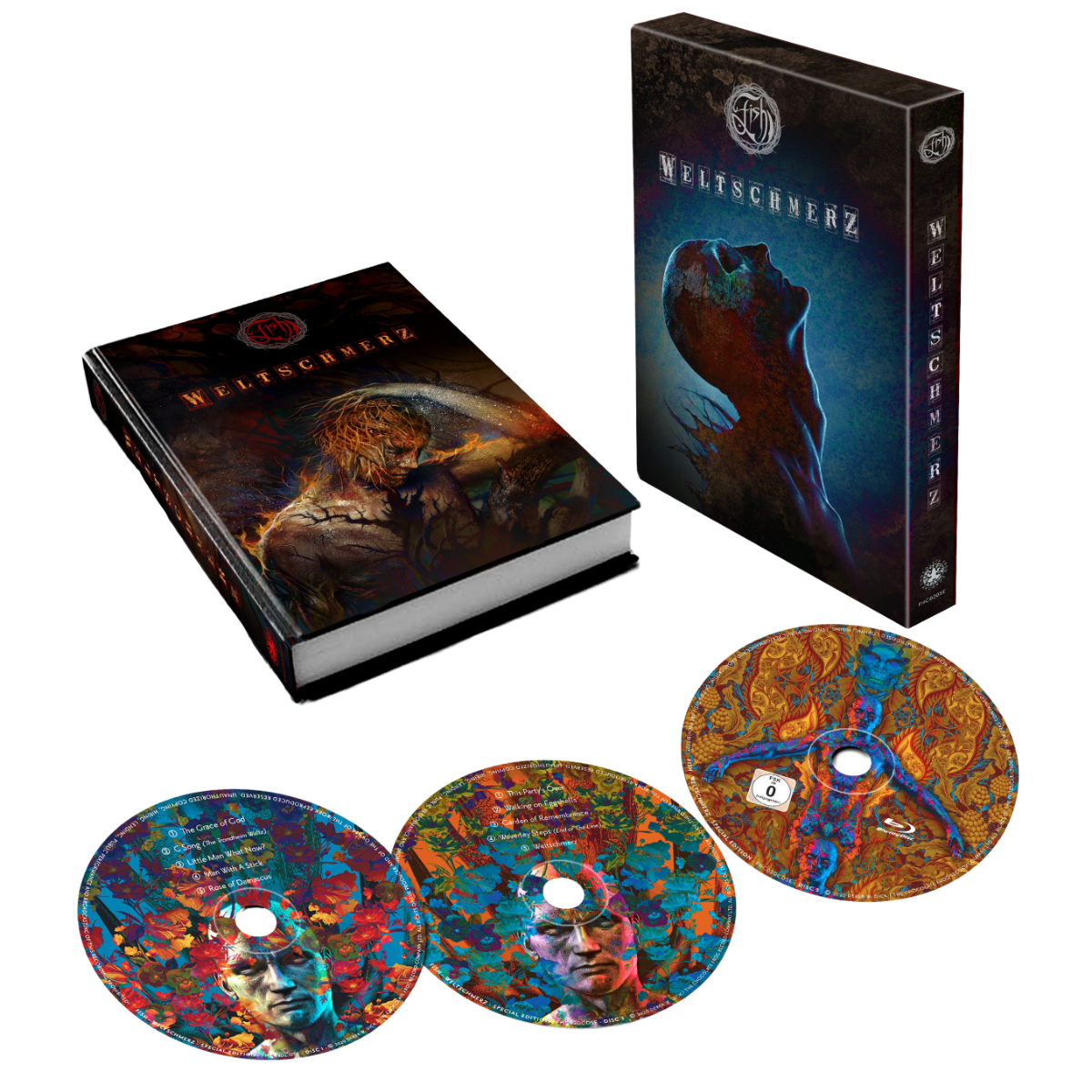 We have utilised an array of musicians including elements of the Scottish Chamber Orchestra, a brass section, sax and whistle player David Jackson (Van Der Graaf Generator), drummer Craig Blundell (Steve Hackett, Porcupine Tree) guitarists John Mitchell (It Bites, Lonely Robot) and Robin Boult, keyboard player Liam Holmes, backing vocalist Doris Brendal and of course Steve Vantsis on bass and various other instruments including programming, to create an exceptional collection of songs that are befitting of my farewell album.

The artwork as always is created and designed by Mark Wilkinson and we decided to create special packaging similar to the ‘Feast of Consequences’ edition. He has done a magnificent piece of work assembling his original artwork, illustrations, photos and my expansive sleeve notes and lyrics across 100 pages that will be presented in a hardback book with slipcase that contains the 2 album CDs and a Blu ray disc.

‘Man with a Stick’ (Single of the Year on Planet Rock 2019) ,’Little Man What Now’ and ‘Waverley Steps (End of the Line) were originally on the ‘Parley with Angels’ EP released in September 2018 and have been remixed for the 2020 release.

The Blu ray disc, only available in the deluxe version, will have a my first ever 5-1 mix produced by Avril Mackintosh and Andy Bradfield (‘Clutching at Straws’, ‘Script for a Jester’s Tear’), the promo videos for ‘Man With a Stick’, ‘Weltschmerz’ and 2 others, live audio recordings of ‘Man with a Stick’, ‘Little Man What Now’ (with David Jackson) , ‘C Song’ and ‘Waverley Steps’ from the 2018 shows, live concert footage of ‘Weltschmerz’ songs from Edinburgh Queens Hall March 2020, demos from 2018/19 and a 90 minute interview conducted by Will Smith of the history and content of the ‘Weltschmerz’ album  filmed here at the Studio by David Barras and Scott Mackay who have created the amazing new video for the title track.

‘Weltschmerz’ will also be released as a heavy duty 180-gram double vinyl album in a gatefold sleeve with colour inserts and as a standard double CD in an FSC approved cardboard wallet with a 24 page colour insert.

The album will also be available for digital download and streaming on recognised providers.

All formats and new ‘Weltschmerz’ merchandise will only be available on our soon to be revamped mail-order service from fishmusic.scot and preorders will start at the beginning of June 2020.

More information on the content and release/ pre-order schedules will be made available as we move forward and up to date news from the March UK tour and the album’s progress will be broadcast on Instagram, Facebook, Twitter and of course on the website.

Please subscribe to keep up to date with what is definitely the most exciting release of my career and I’m sure you will not be disappointed when the epic that is my ‘Weltschmerz’ album finally arrives.

Sincere thanks for all your continued support and belief in my career.