UK tour March 2020 - 'Weltschmerz/Vigil in a Wilderness of Mirrors' 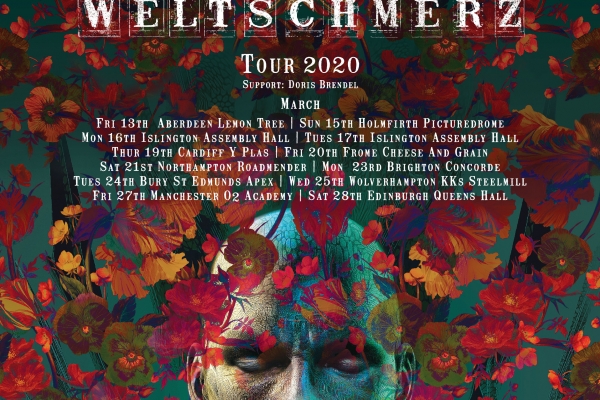 Roll Up Roll Up!! The circus is heading back out on the road again from next March starting off with a clutch of UK dates before heading out to Europe in April for a 6 week tour.

I deliberately chose smaller more relatively intimate venues for the opening round of shows so I can play about with set lists and routines in preparation for what could be a long year.

There are already plans for more UK and European dates in the Autumn with attempts made to capture more open airs next Summer with indoor shows joining the dots.

At the moment these are the fully confirmed gigs and are on sale now from the various websites listed below.

As you well know it’s been a demanding start to the year and I’ve had to adjust and bend to circumstances that have required me to reshape plans and reschedule projects.

Apart from the 4 festivals this summer and the Ayreon shows in September the rest of the year is devoted to finishing the ‘Weltschmerz’ album.

With my mother moving into the Studio we have had to reconfigure our domestic arrangements and an extension that has been going through planning and building warrants finally looks like it’s being rubber stamped. I’d hoped to have had it built by the end of this month but there was so much ‘hoop jumping’ the project has been continually delayed and now looks like building will start in September. It means a lot of disruption and interference as the office is rearranged and utilities that exist in the control room, the main recording area,are tapped in to in order to supply the new extension.It’s not ideal but I have to work round it.

With all this in mind I made the decision to aim at writing with Steve Vantsis and others throughout the summer and getting as much in play as possible with the aim to record the album in October/November /December for an intended release at the end of January beginning of February 2020 immediately before the tour. That way we get a slight break as the building work kicks in and a chance to reevaluate and tidy up ideas before the principal recording. It fits in well with Calum Malcolm’s schedule and I am confident we can have a fully written double album by then.

After all the trials and tribulations of the last 5 months I’m clearing some headspace now and having these new goals in place is inspiring. Mark Wilkinson is now developing the main themes and the artwork is coming together as you can see from the first poster layout which features one of the images from the extended booklet we intend to use for this final release.

Mark will also be working on the remasters for ‘Vigil in a Wilderness of Mirrors’ and ‘Internal Exile’ which I want to have out in September in order to support the creation of ‘Weltschmerz’. I’m still waiting on a license from Warners as they own the copyright of the first solo album but I’m confident we can come to a deal to make it happen.

The 2020 touring will feature a full performance of the ‘Vigil’ album on it’s 30th anniversary and it seems appropriate that my first and my final album should be played together in order to close a circle.

As I already said I intend to follow on with more UK and European dates in the Autumn of 2020 after a presence at open airs in the Summer but touring is being ramped down. 2021 will definitely be my final dates before I retire to write but it won’t be anywhere as near a full tour as on this years intended schedule.

As I have written many times before please don’t ask the overly familiar ‘When are you coming to my town/ country why not here/ there etc etc” I can only play where there are offers that make sense and financially support the circus.I’m 61 now, 62 next year and playing in areas/ countries in order to attempt to ‘break into a market’ is no longer on my agenda.I have limited road time these days and am not the young man with starry eyes I once was. I have to pace my road work and time spent out there has to be rewarding on every level. Physically and mentally it’s more challenging than ever before and I cannot afford to gamble these days.Please accept the reality of my situation as I do.

After saying all that it’s exciting as it ever was putting a plan together although I do have the wrench of leaving my family, house and garden like never before.

Enjoy this tour as much as I hope I will