Stand up, Walk out 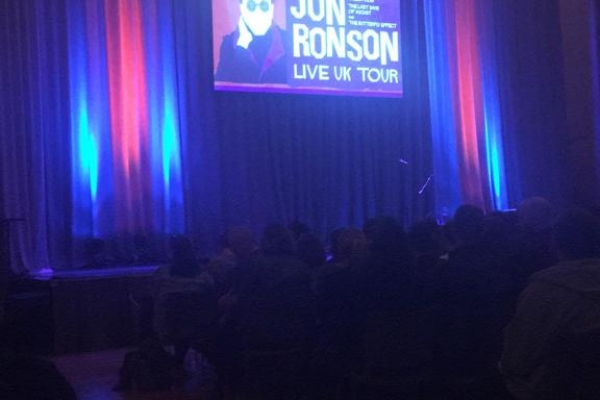 My sister was up this weekend visiting our mum here at the Studio which gave my wife Simone and I an opportunity for a rare night of R and R in Edinburgh.

I’d come across a fabulous review of #JonRonson in the Independent newspaper a month or so ago and decided, despite not knowing much about him to give it a punt. We hadn’t been at any show for a while and figured this would be an interesting step outside our designated comfort zone.

It wasn’t just the show I was interested in but I wanted to get an idea of a one man performance which was a cross between a book reading, observational comedy anecdotes and a Q and A as somewhere down the line I can see myself taking that particular road. In short for me it was entertainment and research combined.

I drove into the city with Simone, timing it so we missed rush hour and glided into an empty parking spot in George Street just as the meters petered out. We were early for the show as we welcomed a chance for a meal together with just the 2 of us.

My wife wanted Italian food and I’d clocked the #BarNapoli as we drove up Hanover Street just down from the venue.The last time I remembered eating Italian in the New Town was with my dad in October 1974 when we came back from a family holiday at Crieff Hydro just before we went to Easter Road to see Hibs gubbed 4-2 by Juventus in the 2nd round of the UEFA cup.It wasn’t a great night. The pre match food however was great.

I’d made a good call with the Bar Napoli on this occassion.
The meal was wonderful in a cosy vibrant environment with the chefs busying away in the open kitchen.I loved the sign above the serving counter which said” we don’t have wi fi here, why not talk to each other and pretend it’s 1995″. We did and the minutes disappeared as we attempted to gorge our way through large plates of spaghetti Amalfitana and pizza Regina Margherita having already devoured a bed of mussels and gamberoni for starters. Showtime was getting close and the white flag was raised at our table with at least another 10 minutes of feasting remaining on our plates. The bill was duly paid and we sauntered off into the city dreich blowing vape reek in the rain like heavily laden steam engines.

I like the Assembly rooms as a venue and was really looking forward to the evening’s entertainment. I’d talked the show up with my wife who had slightly less idea than me of what was in store.

The staff were all helpful and pleasant and after avoiding the bar and the merch stall, which I planned to hit later we took our seats in the hall.

Production was pretty simple with the obligatory projection screen for the expected power point show. We were only waiting for 10 minutes before Jon ambled on stage with little fanfare apart from a muted intro track.

This is where I should wax lyrical about the performance but I can’t.

We were seated relatively close to the back and to stage right and had a decent enough view of the show although Simone had to squint round a mass of human who took his seat in front of her just as it all began. We had a little laugh as normally i’m the one feeling guilty when I sit in front of people and try and huddle down to avoid blocking sight lines and comments.

As soon as Jon started speaking I knew we were going to be in trouble.

Now I know my hearing has been savaged over the years from gigging and having studio headphones up too loud at too many recording sessions but it still works and I know bad sound when I hear it.The problem was I could hardly make out what he was saying because of a number of factors. The vocal mike was too quiet and it was a radio mike that I recognised benefitted from a directional source. Jon was speaking over the top of it so not all the frequencies were being picked up.With the PA being eq’d bottom heavy and favouring low mid end I could hardly make out anything he said. I thought at first it was just me but Simone couldn’t make out anything either.
When the recorded powerpoint presentations came on the sound was about 25% louder but still difficult to decipher.

All this wasn’t helped by the door 3m behind us which when opened delivered long loud squeeks as the pneumatic hinges went to and fro. It actually drowned out the PA for seconds at a time as there was someone popping in and out on a regular basis. It started to become really distracting. I just couldn’t get a handle on the performance and Simone was struggling to make any sense of what was going on on stage.Not having any real idea of what the subject matter was, coming in relatively blind, it was making for an awkward long night.

Also not helping was the fact that Jon wasn’t exactly projecting. Maybe he had an ear monitor up too much so he thought he was louder than he actually was out front but his voice was what you’d expect from someone speaking in a lot smaller more intimate room.

The audience at the front of the stage were laughing away merrily as were a few people around us but in all honesty I just couldn’t get to grips with the show and was starting to feel distinctly uncomfortable.

I looked around for a sound engineer that I could maybe ask to tidy up the PA but I couldn’t see one.That’s not something I would ordinarily do but it was a one man show with one mike and a powerpoint input not a 6 piece electric band and this all should have been easy. Simone told me she didn’t understand anything that was being said and I asked her if she wanted to go. She nodded.

At the next power point video we exited by the squeeky door. We had lasted exactly 20 minutes.

I told the bemused Assembly Room staff outside in the bar area and the merchandisers what I thought and they agreed to pass my opinions to Jon Ronson’s team. It wasn’t their fault and I wasn’t angry, just disappointed.I didn’t bother asking for my 55 quid back and decided to pass on the merch stall..

I’m sure that if there was a bit more attention paid to creating a decent sound that I would have enjoyed the show but in all honesty I can’t provide any sort of review as I have no idea of the content.

We walked out of the empty foyer into a near deserted George Street and back to the car to head home.It was a bit of a downer on what had started of a promising evening and much like Hibs back in 74 we should have been satisfied at 2-1 up and been happy with the free and easy parking and the great meal rather than pushing for the extra goals and getting caught out..

We decided to pick up some wine on the way back and I bought some flowers for my wife. 30 Busy Lizzies for £3 at Tescos was a result and the romantic gesture was appreciated by my fellow gardener.

Over a glass back in the kitchen Simone put on a couple of You Tube clips of Jon Ronson.It was cool and funny and everything was clear and audible. He was wearing a headset microphone.He must have left it in the hotel last night.

It wasn’t a total failure of an evening. I learned a bit about what not to do if I was in that position.It’s easy to take the ticket money for granted but as a total solo performance you have to put in that extra effort to make it happen and pay attention to the detail as when it’s all on you that’s what makes it or kills it. Last night I felt that detail was missing.

Or maybe I just wasn’t in enough on the joke.