Feed the Birds tuppence a bag.... 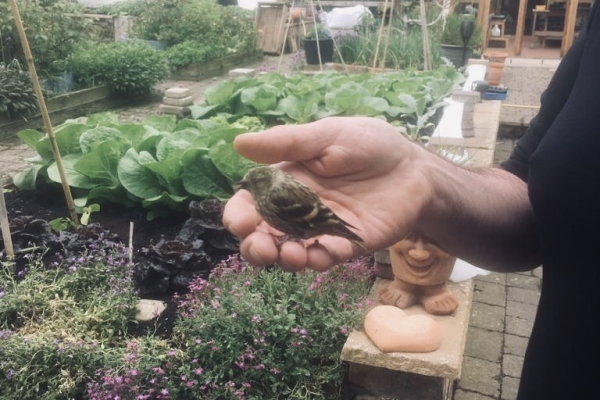 The other day I was in the front room of the studio and a small shape hurtled past my shoulder and crashed into the french doors.It turned out to be a young finch that had flown through the open kitchen door and in a panic flew to the closest exit which turned out to be blocked by a pane of glass.

Needless to say it was badly stunned and at first I thought unsaveable. A few minutes in the warmth of my hand and it started to come to and a few more later the eyes opened and gradually it recovered until it flew off into the kitchen garden to perch on the rowan tree with it’s fellow feathery companions.

I had an immense feeling of wonderment cradling that tiny creature in my hand and a deep sense of joy watching it take off from my palm.

I’ve never known so many birds in the garden, the populations obviously helped by the absence of the cats that sadly passed away a few years ago. Simone and I debated about replacing them but the presence of so many flying and singing creatures in the garden outweighed bringing back furry assasins.

The dawn chorus is a natural alarm clock and together with the squirrels that run over the flat roof above our bedroom at 6 every morning ,one of which seems to be wearing large boots,it’s a wake up call that makes us smile. We are kind of used to it now but Steve Vantsis, who slept in a tent in the garden a week ago due to our lack of sleeping accomodation was driven slightly mad by the cacophony and we got used to finding him bleary eyed in the kitchen with a mug of tea when we got up to make my mum’s breakfast in the ugly hours.

The only downside of having a Hitchcockian frenzy of feathered friends is that the feeders constantly need filling and boy do these far flung descendants of dinosaurs feed. With an extended family of riotous starlings nesting in the garage eaves,a coven of crows and jackdaws creating havoc and a squadron of pigeons waddling on the ground snaffling up the fallen seed it’s a messy affair. The gangs of finches and sparrows go through the niger seed like never before as they were a rarity when the cats were in town.

But it’s all worth it to hear the evensong and especiially from the blackbirds and thrushes. The nervous woodpecker always enthralls when it arrives at the peanut hanger and I’ve snapped quite a few good shots of it with my Nikon and the 70-200mm lens from the couch.

This gardening leave I’m on is most definitely good for the soul and I’m constantly overawed at the swirl of nature around the Studio.

The finch incident did bring back a smile as I remembered my mate Yatta heading out of a hotel in Italy on a summer tour, shades on, effusing coolness and striding with confidence, wearing his obligatory extremely loud Hawaiian shirt and reeking of after shave, waving at us in the bar and walking face first straight into the glass sliding doors that hadn’t registered his approach. The extremely loud thunk of him meeting the immoveable object creased us all up as he vainly tried to reassert his cool and make out it was a deliberate comedy moment.

Only perhaps outmatched by my former office manageress who, while during the filming of the Fishheads Club live sessions here at the Studio and slightly the worse for wear, walked straight into the closed sliding glass kitchen doors much to the amusement of the assembled invited audience who saw the inevitable coming long before she did.That incident, unlike Yatta’s was actually caught on camera and is still in the archives.Perhaps for the right figure it could be revealed if only to contribute to the bird seed fund.

Thankfully neither of the incidents resulted in anything apart from damaged pride and didn’t require any gentle stroking and encouragement.Unlike the finch all it took for recovery was an opened bottle of beer put in their hands.
Cheep at the price