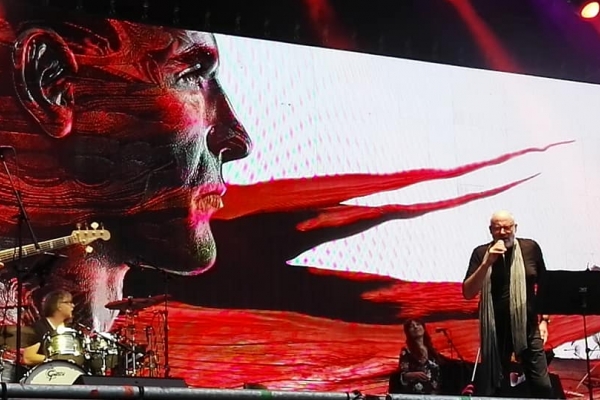 Back from Bonn and into the Studio writing sessions with Steve V for another creative head to head. Not a bad start as we built the skeleton of another new tune ‘The Grace of God’ which was born from an idea originally named ‘Scanner Song’.

I was glad to get things off and running again as it had been a fraught run up to Bonn. After the New Day festival I came home to what was supposed to be a blocked off lyric writing schedule.With my Mum’s house in North Berwick going on the market in the coming weeks we had to start the emptying/ moving process. The Monday, Tuesday and Wednesday following the Faversham weekend was earmarked for Simone, Tara and my Mum and I to begin and although it was a lot of work we managed to make huge inroads into the eventual clearance. Meetings with estate agents, photographers,valuers and assessors came on top and my stress levels were rising.Wednesday night my wife and I had a romantic evening in the tent in the orchard as Steve wasn’t due back till after the Bonn weekend and this was the first opportunity to try out real garden living.

Next morning we were up literally with the birds and had to drive to a garden shed supplier to check out a cabin to act as a writing refuge in the garden to replace the original building idea we had. Costs and timings had become prohibitive and we had decided on a radical new approach to our home that didn’t require eye watering building costs.It was a successful foray but on the way back I became extremely tired and felt I’d been driving all night. Our previous nights sleep out hadn’t been that disturbed but I felt exhausted.

I noticed a red rash on my leg where I previously had cellulitis which was followed by an attack of sepsis. In the space of about 3 hours I developed a temperature of close to 40 degrees but felt freezing cold, experienced heavy duty convulsions and had difficulties breathing. By 5 o clock I was in an ambulance heading to the Royal Infirmary blue lights all the way.

I spent the next 4 days in a ward on intra veinous antibiotics and drips under constant monitoring.Once again I was lucky and had reacted in time to catch it at an early stage. I was lying in bed that weekend petrified I was going to lose the Bonn show as I had no idea of how long it would take to recover. Thankfully I was released on early Monday evening and am now on antibiotics for at least a month. It was yet another scare in a scary year.

Basically with the high stress levels around just now my immune system has taken a hammering and an
innocuous wound on my shin at an old scar site had let the bacteria in. The doctors think it may have been dormant in the subcutaneous skin layer and as the area doesn’t have a decent enough blood circulation it’s difficult for anti biotics to get to grips with the bugs.Therefore this time I’m on a long term dosage.

No one was more relieved than I to get off the plane in Dussledorf and reach the hotel on Friday to meet up with the band. None of them knew the hit I’d taken and I’d kept it very quiet for obvious reasons.

We stayed in a near deserted Maritime hotel in a near deserted area of Bonn surrounded by empty government and office buildings closed for the weekend. Meal in the hotel; restaurant with a book (‘The Pearl’ by John Steinbeck) and an early bed with my phone alarm set to wake me at 6am for one of my 4 daily antibiotic doses.

Soundcheck at 11.45 and down to a beautiful site by the river Rhein which was invisible to us on stage as a single neighbour across the water had complained about sound on previous festivals there. He had a legal injunction which meant a huge wall of containers had been erected to block the sound ( and the view) and the stage volumes had to be kept ridiculously low.Not ideal but we just had to deal with it.

I caught up with Ian Anderson for a quick natter as we waited back stage for our individual sound checks. He was his usual wonderful eccentric self and it was great to meet up for the first in a long while.I knew quite a few of his crew and band including his production manager Chris Archer who had been my out front engineer many moons ago.

Check was fine and everything was dandy. Back to the hotel for more antibiotics and a meeting with my agent about next years European touring. Brexit and it’s consequences were high on the agenda and there are still a lot of questions we don’t have answers to.We just have to forge ahead and hope for the best but there are some niggling worries.

Back to the site which thankfully was only 10 mins away and more catch ups with Mariusz from Riverside and his band and a few others I hadn’t seen for a while. 6 o’ clock antibiotics and no food for 2 hours. I was onstage just before 7 so I’d catch catering later.

The gig went well and John Mitchell has definitely found his feet racking up some wonderful solos in amongst a near flawless perfomance. The band were tight and we marched through another short setlist with aplomb. The rain nearly held off as we layed but just after we finished with ‘Lavender’ it plummeted down again as it had done before our set. It appears I am no longer a raingod.

I had issues after the show and had to miss the chance for a meal at catering. We didn’t hang around for the Tull set as side of stage was too exposed and I wasn’t standing around outfront in the rain. The hotel was empty when we got back and there was no food available. We sat outside by the fountain drinking the back stage rider and I held up a white flag around midnight. As the flights home were late in the day we had an extended check out time and I slept as long as I could after waking up at 6 for my antibiotic ritual.

An hour in a van to the airport then a flight at just before 6. I arrived in Edinburgh to neck down my pills and drive home to a very concerned wife and family.

I’m feeling a lot better now and just glad I made it through the weekend and the performance.Only a week until the final festival in Perth. Foss is in tomorow to join the writing team and we will be huckling down to song smithing over the next days. It was a lost week before Bonn but somehow I’ve managed to catch up and get forward motion happening again. It’s been a sair fecht so far this year but I can still see the light.