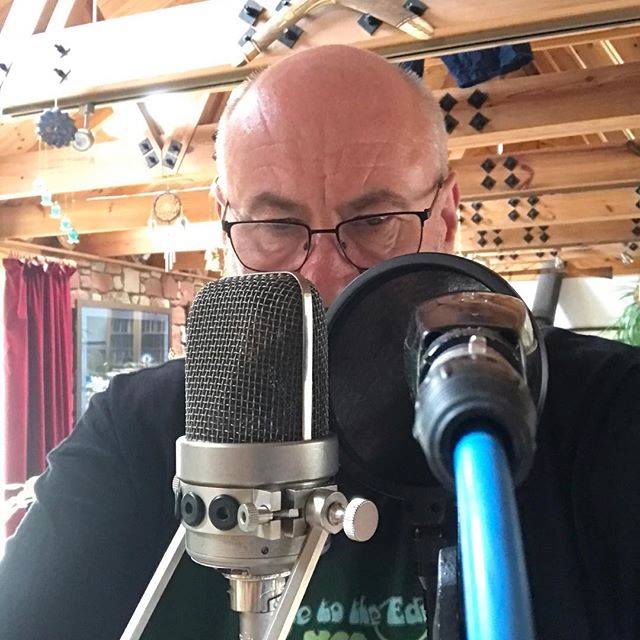 It’s been a full on last couple of weeks here at the Studio as we move into the ‘Weltschmerz’ recording sessions. The schedule was always going to be tight but we are moving upward and onward in style and everything is coming together as I planned and hoped for. We are on time and in the zone. 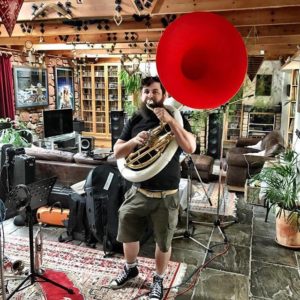 Mikey Owers with his spectacular sousaphonebe tight but we are forging ahead and on time. We now have 4 tracks well advanced, 3 of which will be on the EP which has been given the title ‘Parley with Angels’. 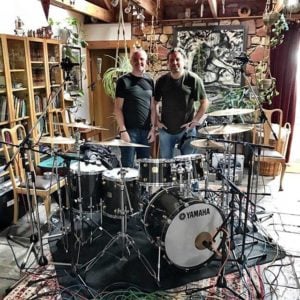 Dave Stewart finished all the drums last week with Steve Vantsis wrapping up his bass parts today after Mikey Owens completed all the brass parts which had been arranged by Dave Milligan. Mikey played flugel horn, bass trombone, trombone and trumpet on ‘Waverley Steps’ and ‘C Song’ although he didn’t used the impressive sousaphone he brought along to his session. Having real brass on these tracks has made an incredible difference and the textures and colours make them sound very rich and deep. Martin Green was in on Tuesday to play accordion on ‘C Song’ which has a feel of a cross between ‘Family Business’ and ‘The Company’. Although it will not be on the EP we will be playing it live on the Autumn tour together with ‘Man with a Stick’, ‘Waverley Steps’ and ‘Little Man What Now’. 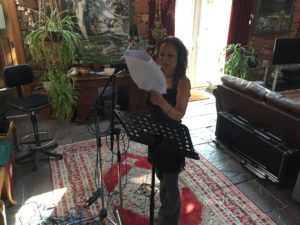 Doris Brendel was in the Studio yesterday singing backing vocals on all the tracks and has lended a great presence to them. In particular ‘Little Man’ which also awaits a saxophone performance from none other than David Jackson formerly of Van Der Graaf Generator. When Steve and I started on this track I knew it needed a spooky atmospheric sax and having been a huge fan of VDGG back in the day I felt Dave was perfect to bring on board. It would have been great to have him here but due to various constraints he will be performing ‘remotely’ and sending his contribution up to us next week. I hope he will be able to join us in person when we continue the recording sessions in January/ February next year. 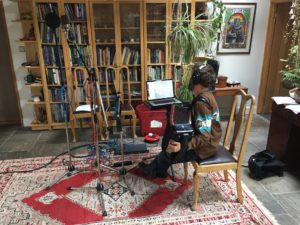 Robin Boult has completed most of his work on the album but still has to send us up a major solo for ‘Waverley Steps’ which he is recording, again remotely, at his own Studio in Wendover this weekend. The only other big slab of recording should be with us early next week as Egbert Detrix has put together string arrangements as he did on ‘Feast of Consequences’ and is sending over files, again early next week, of his sessions with his Dutch string quartet.

The last thing we have to do is record the main vocals. I already have advanced guides on all the tracks which are currently marked at about 7.5 out of 10. I want to at least hit 9’s and Calum and I have 3 days earmarked tomorrow and next week to finish them off. Calum wants to start mixing at the end of next week in order to have the digital downloads and production masters with the relevant people by the 9th of September. With Mark Wilkinson finishing the artwork by Tuesday we will have all the parts in place on time to have the physical ‘Parley with Angels’ EP for the tour. It’s taken a lot of focus and concentration to bring it all together from all parties concerned in the creation and delivery but fingers crossed it will all fall beautifully into place. 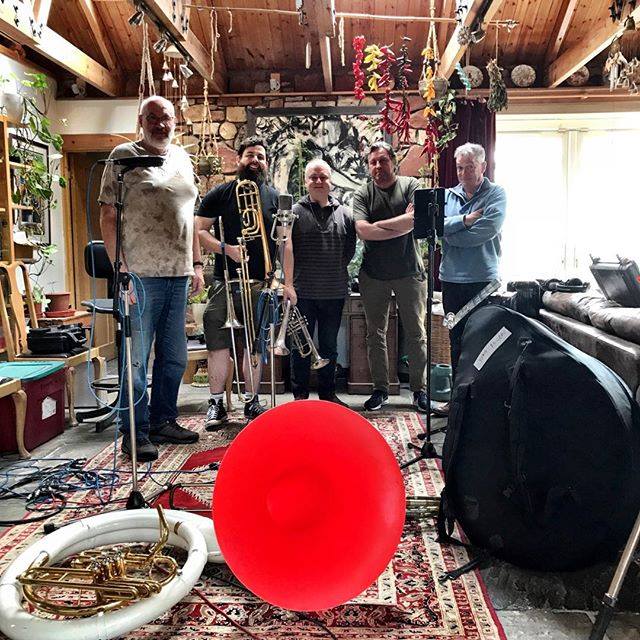 Steve has done a wonderful job advancing the songs leaving Calum with a lot less work to do than on previous albums. The frame works and maps that we originally set out to take the pressure of the actual main recordings have served us well and although it has been very intense the attitude of everyone throughout the sessions has been exemplary and nowhere near as fraught as I thought it would be. By the end of next week we will have 4 songs fully recorded and going into mixing, around 35 minutes of music with the 15 minute ‘Rose of Damascus’ about 65% finished. One more song and that would have been considered an album.

We still have ‘Walking on Eggshells’, ‘Perdido’ and ‘Scanner Song’ (working title) along with the other 2 “epics” ‘Market Garden’ and ‘Cutting Song’ (working title) in formative stages all of which we will be working on while we are on the road for recording in January/February/March next year. I’m sure there will be other ideas that will move into position as we cover the miles and with this positive start to the double album that is ‘Weltschmerz’ our confidence and motivation is extremely high.

‘Parley with Angels’ will be available for pre order in the next couple of weeks from the www.fishmusic.scot website and also as a download from the usual channels as well as on streaming services. It will give you a chance to hear the new material before we hit the road on 22nd September starting with a sell out show at Edinburgh Queens Hall.

It’s non stop just now and with rehearsals only a couple of weeks away I’m relishing the challenges and thriving on the pressure. There have been times when I’ve wished I had management to take some of the nitty gritty, day to day demands from me but again sitting in the back of the control room with Calum and Steve doing what they do best it’s been good to get my head working on other things rather than throwing in unnecessary oars.

As the singer it’s easy to feel left out sometimes as extremely talented musicians lay down their ‘parts’ on the album but working with people who are excellent at what they do I am secure in the knowledge that  what’s going down ‘on tape’ is how it should be and any input I may have is somewhat superfluous. I just have to concentrate on hitting those ’10’s’ when I am standing in front of the mikes tomorrow and consolidate and embellish their contributions. It’s very special so far and I want to make it even more special.

What’s inspiring is that everyone who has come into play on ‘Weltschmerz’ so far has commented on how amazing the songs are and how much they like them. They are not mainstream and are very ‘different’ and all have said how ‘Prog Rock’ they are. As  a final album I find myself returning to old roots and I am loving it.

I can’t provide any more details yet but will do as soon as I have them. I am not using any ‘fund me’ groups on this album I am going alone and supporting the recording of this double farewell album by other means. This EP is important as it is a bridge toward the final finished project next year.